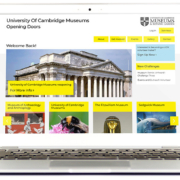 Nikki has championed the Volunteer Makers system at UCM and as familiarity grew with the concept, it is now used by most of the institutions to engage and inspire volunteers and manage their tasks.

UCM now has over 1000 Volunteer Makers, from all walks of life, and these helpers interact with its museums in a variety of ways.